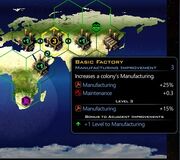 The selected factory is receiving a total of 3 adjacency bonuses from the surrounding factories and adding +1 to those factories.

The Adjacency bonus is the bonus improvements receive from being in tiles next to similar improvements or granted through tile bonuses. Some buildings, such as the Colony Capital can give bonuses to multiple types of improvements.

If there is an adjacency bonus active between tiles a small arrow will appear between the tiles pointing in the direction the adjacency flows. Adjacency can flow both ways.

For example, if you build a Basic Factory the impact of that building is an increase of the colony's manufacturing by +25%. Building a second Basic Factory in the tile next to it would add 1 level of adjacency to both factories, adding +5% to both. By placing both factories next to each other rather than apart adds 10% to the colony's production. If a third Factory was added in a triangle it would take the adjacency level of all Factories to 2, giving 10% to each factory, adding 30%. Compare to placing the factories in a line, only the middle Factory would be level 2, with the two other Factories both level 1s, adding only 20% bonus production.