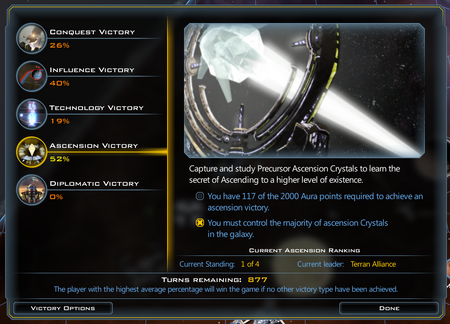 There are five victory types in Galactic Civilizations III: Conquest, Influence,Technology, Ascension, and Diplomatic. Each has its own specific goals that must be met before a player is crowned absolute ruler of the galaxy.

This is the classic 'murder everyone' victory.

You must defeat all other major races to win.

This is the 'shining city on the hill' victory, also referred to as the 'cultural' victory.

This is the 'we are unto gods' victory. You don't have to control the map like you do for an Ascension Victory, but you do have to research a whole lotta tech.

Tech Victory Points to track progress towards a research victory.

This is the 'control point' victory. Also it makes your people godlike beings that transcend the mortal universe, so that's pretty cool.

This is the 'can't we all just be friends' victory.

Congrats, you ran out the clock!

The United Planets Victory was deemed too easy in beta, and requires additional development time. It will be reintroduced in a future patch but it seems to be scrapped after the announced final expansion patch.